XEOMIN® (incobotulinumtoxinA) is a prescription medicine that is injected into muscles and used to temporarily improve the look of moderate to severe frown lines between the eyebrows (glabellar lines) in adults.

Xeomin® is a botulinum toxin type A. Dr. Balogun affectionately refers to Xeomin as naked Botox! Xeomin® claims to be an innovative Botulinum type A formulation, in which the complexing proteins have been removed by an extensive purification process from the botulinum toxin complex. In contrast to the other commercially available preparations, Xeomin® contains the pure 150 kD neurotoxin.

It is widely accepted that the bacterial protein present in other products play a role as promoters of an immune reaction, resulting in a loss of effect and reduction in duration of activity. Studies show that Xeomin®, without the complexing proteins, has the lowest content of protein of all of the available botulinum toxins and furthermore show that repeated application of Xeomin®, even in high doses, does not induce the formation of neutralising antibodies.
This means that Xeomin® is able to provide similar results to those achievable with the other products without the risk of antibody formation, providing continual long lasting effects. This could be relevant when large doses are being used for medical indications, but many industry experts question the relevance when this product is used for cosmetic purposes.

How does Xeomin work?

It temporarily prevents the release of the neurotransmitter acetycholine from sympathetic nerve terminals.

Like other botulinum products, Xeomin® must carry a black box warning regarding a rare risk for spreading outside of the injection site. If this occurs, life-threatening swallowing and breathing problems may result. This has not been seen in people receiving neurotoxins for cosmetic reasons or to treat blepharospams. It has mainly occurred among children treated off-label for cerebral palsy-related muscle spasms. Other general Xeomin® risks may include:
Your doctor should discuss all the potential Xeomin risks with you during your consultation.

What areas can be treated with Xeomin®?

Xeomin® is used to treat dynamic facial wrinkles. Areas Dr. Balogun most commonly treats with Xeomin® include crow’s feet (lines around the eyes), worry lines between the eyebrows, and the lines across the forehead.

How long does it take for Xeomin® to work?

The effects of Xeomin® are usually seen within 5 days. It will take up to 14 days to see the final results from the treatment.

How long does Xeomin last? 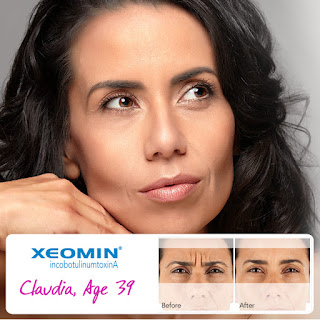 Xeomin® treatment lasts anywhere from 3-6 months, depending on the areas treated.

Botox no longer works for me. Will Xeomin®?